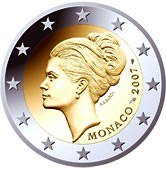 Details relating to the Monaco Commemorative of 2007.

This coin, which was issued to commemorate the 25th anniversary of the death of Grace Kelley, bears two distinctions – it is the first commemorative coin issued by Monaco and secondly it is to date the most valuable commemorative coin minted. One in good condition can cost up to € 1,500 . This, of course, is in large part due to the fact that the number of coins minted was small  - only 20,000.

Grace Kelley, who was a very successful American film actress, married Prince Rainer III of Monaco in 1956. She thereby became a princess of  Monaco.

The design of the coin is simple and elegant – a profile of Grace Kelley, looking to the left fills the inner circle. The name of the issuing country and the year of issue are on the edge of the inner circle from six to two o’clock. The year of issue is preceded and followed by the mint mark and the the mark of the engraver, respectively. Finally, the name of the designer,”R.B.BARON”is seen near the nape of the neck.