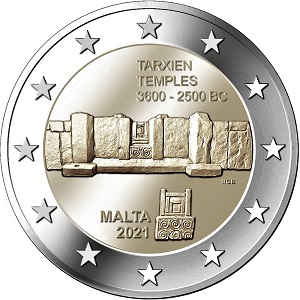 Details relating to the Maltese Commemorative of 2021.

This is the 6th coin in a series of seven devoted to the prehistoric sites in Malta.

This coin deals with the Temple of Taxien.

This site was discovetred by a farmer in 1914 while plowing his fields. Excavations were immediately initiated and by 1920 had uncovered four different but connected temples which are estimated to have been built between 3600 and 2500 B.C.

In 1992 the Temples of Tarxien were declared a UNESCO World Heritage Site.

The motif of the coin depicts the central temple believed to have been built around 2900-2500 BC. This is shown running horizontally across the middle of the inner circle.

Below this at the bottom of the coin and slightly to the right is an altar built around 3,000 BC. Spirals are to be seen on the front of the altar - it is not clear whether they have some symbolic significance or are merely decorative.

Under the temple between three o'clock and four o'clock are the initials of the designer 'NGB'.

Finally to the left of the altar we see the name of the issuing country as well as the year of issue "Malta 2021".