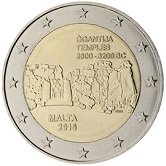 Details relating to the Maltese Commemorative of 2016.

This coin is the first in what is to be a series of seven coins dealing with prehistoric sites on Malta.

Honoured in the 2016 coin is the Ġgantija Temple Complex. This is on the small island of Gozo to the north west of Malta and is one of the oldest free standing structures in the world and also one of the oldest having a religious significance. It was constructed in the Neolithic period about 3,000 years BC and is thus older than Stonehenge or the pyramids. In 1980 it became part the UNESCO World Heritage programme.

In the inner circle is a partial view of the complex. In the upper right is the name of the complex and the believed date of its construction. In the bottom left is the issuing country and year os issue – Malta 2016.

The initials of the designer “NGB” appear at four o’clock.