Details relating to the Maltese Commemorative of 2013. 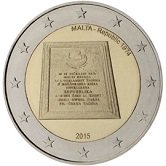 This coin is the fifth and last in the Maltese series on the constitutional history of Malta.

On 13th December 1974, Malta was declared a republic. This followed constitutional changes that were agreed to by a majority of the Maltese parliament.

In the inner circle we see depicted a marble tablet that is affixed to the façade of the presidential palace in Valletta. The tablet represents Malta’s transition from a monarchy to a republic. The Maltese coat of arms, showing a fishing boat, a spade and a pitch fork, is at the top of the tablet.

On the edge of the inner circle, from twelve to two is inscription “MALTA – Republic 1974”.