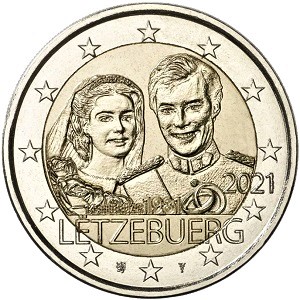 Details relating to the Luxembourg Commemorative of 2021.

When the property of Maria Batista in Cuba was expropriated in the course of the Cuban Revolution, she moved to New York and later to Geneva where while studing she met Henri.

The motif is a bold image, almost filling the coin's inner circle, of the couple after the wedding.

On a line running from eight to four o'clock is the inscription (somewhat difficult to read, of the date of the wedding - "14.FEBRUARY 1981".

On the left of the inscription are some rose petals and on the right interlocking wedding rings.

Under the line the name of the issuing country "LËTZEBUERG" (Luxembourg) is shown in very bold type. The year of issue 2021 is seen between three and four o'clock, intruding into the outer ring.

In the outer ring, flanking the very bottom star are the national mint mark  ( a double lion with a double tail) and the mint mark of the Dutch mint Koninklijke Nederlandse Munt. They appear, respectively on the left and on the right.