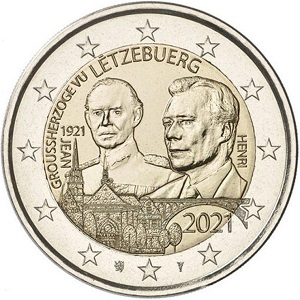 Details relating to the Luxembourg Commemorative of 2021.

This coin commemorates the 100th birthday of Jean von Nassau.

During the war the grand ducal family was in exile. Jean however, joined the British army and took part in the liberation of Europe.

Along the bottom of the inner circle we see the cathedral of the city of Luxembourg as well as the Adolphe Bridge.

Around the edge of the inner circle, from eight to one o'click is the inscription "GROUSSHERZOGE VU LËTZEBUERG" (Grand Dukes of Luxembourg).

Just in from nine o'clock is "JEAN" shown vertically and above that is JEAN'S year of birth 1921.

In the outer ring, flanking the very bottom star are the national mint mark  ( a double lion with a double tail) and the mint mark of the Dutch mint Koninklijke Nederlandse Munt. They appear, respectively on the left and on the right.