Details relating to the Luxembourg Commemorative of 2014. 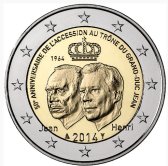 
This coin commemorates the 50th anniversary of the accession to the throne of Grand Duke Jean.

After the abdication of his mother on 12th November 1964, he acceded to the throne and took the appropriate oath on the same day.

Around the edge of the inner circle is the inscription: ”50e  ANNIVERSAIREDE L’ACCESSION AU TRÔNE DE GRAND-DUC JEAN” :

The date of accession of Jean (1964) is shown above his head.The year of issue 2014 is at the bottom and is flanked by the mint marks.

Note: Interesting point – going against the standard requirements there is nowhere an indication as to what the issuing country is.