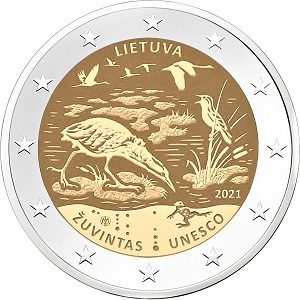 Details relating to the Lithuanian Commemorative of 2021.

This coin was minted in honour of the Žuvintas Biosphere Reserve which is located in southern Lithuania.It covers 5,442 hectares and includes many interesting natural features including bogs, a lake and a forest.

It is the oldest nature reserve in the country and was established in 1937.
In 2011 it was included in the network of UNESCO biosphere reserves.

It includes over 4,000 different species of animals, plants and fungi.

The motif of this attractive coin shows various aspects of  the reserve.

In the middle left of the coin we see a bittern on a small grass island about to catch a fire bellied toad in the water.

In the middle right is a sedge warbler on a blade of reed and over the warbler a mute swan is flying by. The mute swan is the heraldic animal of the reserve. Further away four other swans are flying.

Around the toip of the inner circle is the issuing country "LIETUVA" (Lithuania).

Around the bottom of the inner circle, running fronm approximately eight to four o'clock we see "ŽUVINTAS" and "UNESCO". The former is an acronym for the United Nations Organisation for Education,Science and Culture.

And finally, just above "ŽUVINTAS" at seven o'clock is the mint mark "LMK".