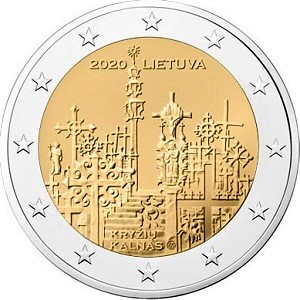 Details relating to the Lithuanian Commemorative of 2020.

The theme of this Commemoratrive coin is "The Hill of Crosses".

This has great historical significance for the Lithuanians.

In the past Jurgaičiai Castle stood on the hill but is said to have been destroyed in 1348.At that time the Lithuanians were the last pagan people in Europe and fought against the Eastern Crusades of the Teutonic Order but ultimately succomed.

Although the castle was destroyed, the hill survived as a mythical sanctuary.

The revolts of the Lithuanians against the tsarist rule were brutally sppressed and the relatives of those killed placed crosses on the hill.

The crosses were initially removed by the Soviets but were allowed to be reerected when Gorbachev came to power.

The motif of the coin shows a number of crosses with a stairway going up through the middle - presumably representing the idea of a hill.A cresent moon cross is superimposed on the stairs. The whiteness of the moon represents virtue.

On the edge of the inner circle, just below nine o'clock is an image of Kasimir, the patron saint of Lithuania.

At the top of the coin in a straight line running from eleven to one o'clock we see the year of issue as well as the issuing country - 2020 LIETUVA.

Finally at the bottom(between six and seven o'clock) is the inscription KRYŽIŲ KALNAS (cross hill) and immediately to the right is the mint mark a small circle within which (difficult to read without a magnifying glass) LMK.