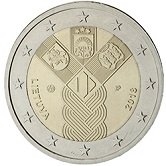 Details relating to the Lithuanian Commemorative of 2018.

This coin commemorates the re-establishment of the state of Lithuania.

It is one of a joint issue by the Baltic States Estonia, Latvia and Lithuania commemorating/celebrating their establishment or in the case of Lithuania the re-establishment.

On the edge of the inner circle between three and four o’clock is the year of issue “2018” and between nine and eight o’clock is the name of the issuing country, in this case “LIETUVA”(Lithuania).