Details relating to the Italian Commemorative of 2022. 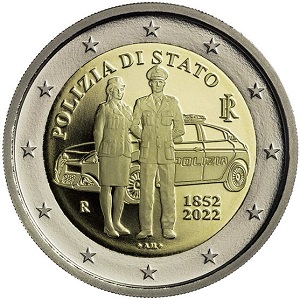 This coin commemorates the 170th anniversary of establishment of Italian State Police.

The motif of the coin, which fills the inner circle of the coin, shows a police car in front of which two members of the police force are standing - a policeman and a policewoman.

Around the edge of the inner circle,running from nine o'clock to one o'clock, is the inscription "POLIZIA DI STATO".

The issuing country, Italy is shown at two o'clock by "I" superimposed upon an "R".

The year of the establishment of the police force 1852 as well as the year of issuing the coin 2022 are shown at four o'clock. The mint mark an "R" is shown at eight o'clock.

Finally the initials of the designer "AM" are to be seen at six o'clock.