Details relating to the Italian Commemorative of 2021. 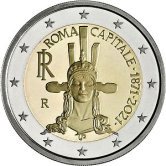 This coin commemorates the 150 th anniversary of establishment of Rome as the capial city of Italy.

Although the state of Italy came into being in 1861 and Rome was chosen as capital it was at that time still under the control the Pope supported by French troops. The latter were withdrawn because of the Franco-Prussian war. This enabled King Victor Emmanuel to occupy the Papal States and Rome was declared to be the capital of Italy in 1871.

The impressive motif of the coin which dominates the inner circle is the head of the goddess Roma. She wears a helmet on which we see a she-wolf reminding us of the foundation legend of Rome (Romulus and Remus).

The she-wolf is sitting on the Alatre della Patria (Altar of the Fatherland).

Around the edge of the inner circle,running from eleven to four o'clock is the inscription ""ROMA CAPITALE • 1871 • 2021 •"which of course designates Rome as the capital of Italy and also incorporates the dates of the declaration as capital city as well as the date of issue of the coin.

Between nine and ten o'clock in very bold letters is the country designation "RI" - on the coin the I is superimposed on the R.

Finally we see the mint mark "R" at around eight o'clock and right at the bottom the initials of the ligature "UP" represented with some artistic flaire!

All in all a very impressive coin - well done Italy!