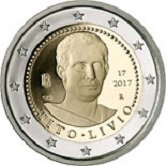 Details relating to the Italian Commemorative of 2017.

The coin commemorates the 2000th anniversary of the death Roman historian Titus Livius – normally referred to in English simply as Livy.

Livy’s most famous and only surviving work is a monumental History of Rome (Ab Urbe Condita Libri).

The work covers the period of the early legends of Rome up to the reign of August Caesar with whom Livy was on familiar terms.

The motif is simply a bust of Livy that fills the inner circle.

Around the edge of the inner circle from eight to four o’clock (clockwise, starting at eight o’clock) is a line of small circles. The gap is filled with a bold inscription: ”TITO • LIVIO”.

In from nine o’clock is the country designation – an I superimposed on an R. Directly thereunder are the initials of the designer “C.M.” Opposite, in from three o’clock, we see one under other 17, 2017 and R. These are the year of  Livy’s death, the year of issue and the mint mark.