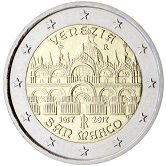 Details relating to the Italian Commemorative of 2017.

The Basilica was started in the 11th century and contains one of the largest mosaics in the Western world.

In the inner circle we see the Western Façade of the Basilica – this is regarded as a sign of the victory over Constantinople in the crusade of 1202/1204. Changes were made to the Basilica in the second half of the 14th century and the date of final completion is taken as 1617.

On the five arches of the western facade are the city patrons of Venice (left to right) Constantine, Demetrius, Marc, George and Theodore, and in the six tabernacles sculptures of the Archangel Gabriel, the Evangelists Matthew, Mark, Luke, John and Mary can be seen. In the pediment of the middle arch is a golden relief of the St. Mark's Lion with a book, whose inscription reads: "Pax Tibi Marce Evangelista Meus" - "Peace with you Mark, my Evangelist".