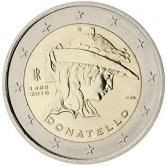 Details relating to the Italian Commemorative of 2016.

This coin commemorates the 550th anniversary of the death of the Italian sculptor Donatello.

The image in the inner circle shows the head of the bronze statue of David which stands in the Bargello National Museum in Florence. The statue is believed to have been created around 1446. The full statue shows a young David wearing a hat crowned with laurels and with his foot on the head of Goliath.

The initials of the artist can be seen between three and four o’clock.