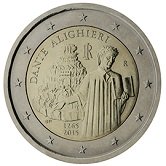 Details relating to the Italian Commemorative of 2015

This coin commemorates the 750th anniversary of the birth of the famous Italian poet and philosopher Dante Alighieri. Italy is the second country to honour Dante on this occasion -the first being San Marino.

Dante Alighiere can be seen as Italy’s Shakeseare. His “Divine Comedy” is rergarded as the greatest work of Italian literature and the most important poem of the Middle Ages. Dante chose to write in the vernacular and not in Latin as was customary at that time. He played an instrumental role in establishing what was to become the national language of Italy.

In the inner circle Dante is seen holding an open book in his left hand. Behind him is the Purgatory mountain showing the souls of those who were guilty of different sins. This is a part of the fresco (Dante and the three kingdoms) by Domenico di Michelino in the Dome of S. Maria del Fiore in Florence.

On the edge of the inner circle from nine o’clock to one o’clock is the inscription ”DANTE ALIGHIERI” and at twelve o’clock the mark of the issuing country. At two o’clock is the mint mark and at the bottom around seven o’clock we see the initials “SP” of the designer together with the date of Dante’s birth and the year of issue.