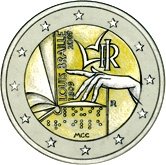 Details relating to the Italian Commemorative of 2009.

This is the second commemorative coin to honour Louis Braille the inventor of the Braille alphabet for the blind.

An accident with an awl condemned Louis Braille to total blindness at an early age of around four years.

His love of reading led the courageous young Louis to develop what became known as the Braille script. He thereby gave access to literature and general information to millions of people who would otherwise been denied it.

In the inner circle we see a hand reading an open book by means of the Braille alphabet.

Underneath the book the name “Louis Braille” is written in the Braille alphabet. Two stylized birds are seen in the upper part of the inner ring. They represent freedom of knowledge.

The top right the superimposed RI stand for the issuing country. At four o’clock is the mint mark R and at the bottom are the initials “MCC” of the artist.