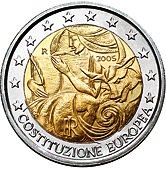 Details relating to the Italian Commemorative of 2005.

This coin celebrates the first anniversary of the signing of the European Constitution.

It was signed on 29th October 2004 in Rome amid great celebrations.

The motif for the coin is very interesting. Europe, in the form of a young woman, is sitting on the back of the god Zeus who is represented by a bull. Europe is holding a pen over the constitution – this, of course, symbolizing the signing of the constitution.

Around the bottom of the outer ring is the inscription: “CONSTITUTZIONE EUROPEA” (European Constitution). The issuing country is shown at approximately seven o’clock in the form an I superimposed on an R. The mint mark is at around ten o’clock and the year of issue “2005” is a little in from the edge of the inner circle at two o’clock.  The initials of the engraver can just be made out at eight o’clock.

As of 2013 only the twelve stars of the EU, continuous and uninterrupted, are allowed in the outer  ring – thus emphasising the unity of the EU.