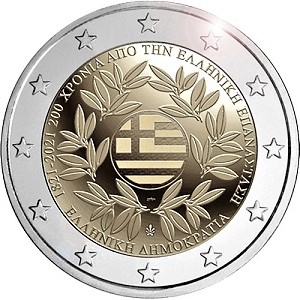 Details relating to the Greek Commemorative of 2021.

This coin commemorates the 200th anniversary of the Greek revolution of 1821.

After the conquest of Constantinople by Sultan Mehmet II in 1453, most of the Greek speaking worldwas part of the Ottoman Empire.

The revolution of 1821 marked the struggle of the Greeks for an independent Greek republic. The revolution actually began on 25th March 1891 and March 25th is now a national holiday in Greece.

The motif of the coin, within the inner circle of the coin shows a small circle in the very middle of the coin with a small section of the Greek national flag. This is  surrounded by twelve laurel branches as a symbol of honor, fame and victory.

and the issue country as “ΕΛΛΗΝΙΚΗ ΔΗΜΟΚΡΑΤΙΑ” (Hellenic Republic). Below is a palmette as a mint mark of the mint Νομισματοκοπείο / Nomismatokopeio (Mint, own designation in English: Bank of Greece - Mint) in Halandri and above the signet "ΣTAM" of the designer.