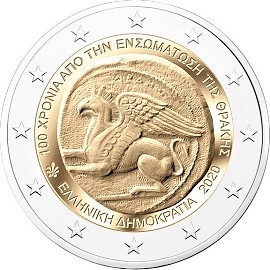 Details relating to the Greek Commemorative of 2020.

This coin commemorates the Treaty of Sèvres in 1920 which united the region iof Thrace with the rest of Greece.

The main motif of the coin is another coin - a stater - from around the 4th  century B.C. This particular one is from the city of Abdera which, by the way, was home to the famous philosopher Democritus.

The motif on the stater is that of a griffin. A griffin is a legendary creature with the body, tail, and back legs of a lion; the head and wings of an eagle.

This, I believe is the only Euro Commemorative Coin that has a motif of a motif!!

Around the edge of the inner circle on the Euro Commemorative there are two inscriptions.

i) From around nine o'clock to around twelve o'clock:

ii) From eight o'clock to four o'clock is the name of the issuing country.

“ΕΛΛΗΝΙΚΗ ΔΗΜΟΚΡΑΤΙΑ” (Hellenic Republic) followed by the year of issue - 2020.

At eight o'clock exactly is the Mint Mark.