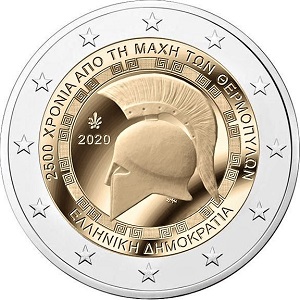 Details relating to the Greek Commemorative of 2020.

This coin commemorates the 2,500 th Anniversary of the battle of Thermopylae.

The battle took place at the beginning of the Second Persian War. A small force of Greeks ca. 1000, on a narrow path held back a Persian army of around 50,000 soldiers.

On the local monument dedicated to those who fought is the inscription " Wanderer, go to Sparta and announce there that you saw us lying here as the law ordered."

The motif of the coin depicts a helmet as worn by the Greeks at the time of the battle.

Around the edge of the inner circle, running from around eight o'clock to four o'clock we see "2500 XPONIA AΠO TH MAXH TΩN ΘEPMOΠYΛΩΝ"(2500 years battle at Thermopylae). At the bottom, eight to four o'clock is the name of the issuing country "ΕΛΛΗΝΙΚΗ ΔΗΜΟΚΡΑΤΙΑ"

To the left of the helmet and within a second inteteresting circle we see the mint mark (Acanthus Leaf) and the year of issue 2020.