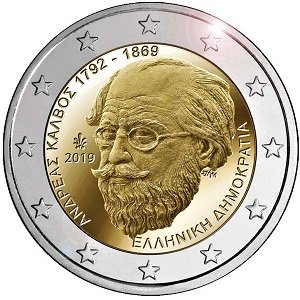 Details relating to the Greek Commemorative of 2019.

This coin commemorates the 150th anniversary of the death of  Andreas Kalvos.

Kalvos was born on the Ionian island of Zakynthos. He is often regarded as one of the most important poets of modern Greece.

His works are unique in that they combine elements of modern Greek as well elements of classical Greek.

The motif is simple and shows a full face portrait of Kalvos looking to the left.

Around the edge of the inner circle, running from seven o'clock to one o'clock is the inscription "ΑΝΔΡΕΑΣ ΚΑΛΒΟΣ 1792 - 1869" ( His name in the Hellenic script together with his date of birth and date of death).

Somewhat in from nine o'clock we see the mint mark and the year of issue - 2019.

From six o'clock to three o'clock is the name of the issuing country       "ΕΛΛΗΝΙΚΗ ΔΗΜΟΚΡΑΤΙΑ".

Finally in from four o'clock, is the mark of the mint master, Georgios Stamatopoulos.