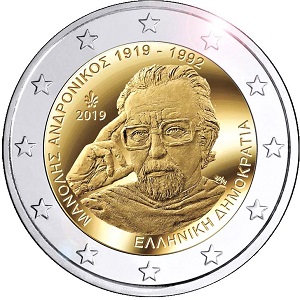 Details relating to the Greek Commemorative of 2019.

This coin commemorates the 100th anniversary of the birth of Manolis Andronikos.

Andronikos, a Greek archaeologist, achieved fame when he discovered in Macedonia under a tumulus (mound) the richly decorated graves of earlier rulers. These graves were unusual in that they had never been discovered and plundered by grave robbers.

This archaeological site at Vergina - thought to be possibly the ancient city "Aigeai", was declared a World Heritage Site in 1996. The grave was thought by Andronikos to be that of the father of Alexander the Great.

The motif shows a full face portrait of Andronikos looking out with his head resting on his right hand.

Around the edge of the inner circle, running from seven o'clock to one o'clock is the inscription "ΜΑΝΟΛΗΣ ΑΝΔΡΟΝΙΚΟΣ 1919-1992" ( His name in the Hellenic script together with his date of birth and date of death).

Somewhat in from ten o'clock we see the mint mark and the year of issue - 2019.

From six o'clock to three o'clock is the name of the issuing country       "ΕΛΛΗΝΙΚΗ ΔΗΜΟΚΡΑΤΙΑ".

Finally on the left shoulder, in from four o'clock, is the mark of the mint master.