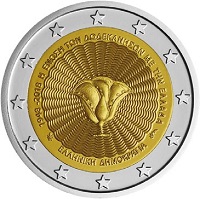 Details relating to the Greek Commemorative of 2018.

This coin commemorates the 70th Anniversary of the union of the Dodecanese Isles with Greece.

Dodecanese means twelve Islands although there are in fact 15 relatively large and around 150 small islands. The islands were united with Greece by the 1947 peace treaty with Italy – the actual unification coming into force on 7th March 1948.

The attractive motif which almost fills the inner circle was designed by Georgios Stamatopoulos.

The motif shows, in the centre, a rose which symbolyses the main island, Rhodes, surrounded by waves. These are represented by concentric circles which consist of small semicircles touching one another. An altogether very pleasing effect.

Around the inner circle, above the edge of the waves runs (from eight o’clock to four o’clock) the inscription "1948-2018 Η ΕΝΩΣΗ ΤΩΝ ΔΩΔΕΚΑΝΗΣΩΝ ΜΕ ΤΗΝ ΕΛΛΑΔΑ"(1948-2018 Union of the Dodecanese with Greece). Further down (from seven to five o’clock) is the country designation EɅɅΝΙΚΗ ΔΗΜΟΚΡΑΤΙΑ" (Hellenic Republic) At eight o’clock, the mint mark (Acanthus Leaf) can be seen and at four o’clock, the mark of the designer.