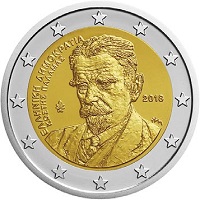 Details relating to the Greek Commemorative of 2018.

This coin commemorates the 75th anniversary of the death of Kostis Palamas.

Kostas was the Greek poet who wrote the words of the Olympic Hymn, composed on the occasion of the first of the modern Olympics in 1896. A central figure of the Greek literary generation of the 1880s, he was a co-founder of the New Athenian School – also known as the Palamian School. His poetry helped raise modern Greek to a literary standard in its own right and not as in any way inferior to the antiquated language often found in literature.

The inner circle is dominated by an image of Kostis.

Around the edge of the inner circle from eight to eleven o’clock is the inscription “ΕΛΛΗΝΙΚΗ ΔΗΜΟΚΡΑΤΙΑ" ("Hellenic Republic") and thereunder "ΚΩΣΤΗΣ ΠΑΛΑΜΑΣ" ("Kostis Palamas").

The Greek mintmark, an Acanthus Leaf, is between the last inscription and Kostis’s face – in from nine o’clock. The year of issue is at three o’clock and the logo of the designer is in from four o’clock.