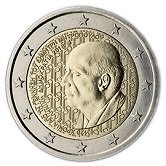 Details relating to the Greek Commemorative of 2016.

The coin commemorates the 120th birthday of Dimitri Mitropoulos.

Mitropoulos is regarded as one of the outstanding conductors of the 20thcentury and became a prominent representative in the cultural life of Greece. He was the musical director of the New York Philharmonic Orchestra from 1951 to 1957.

He is seen in the inner circle surrounded by musical notes.

The  mark of the designer can be seen in the collar on the bust.

The mint mark near eleven o’clock.