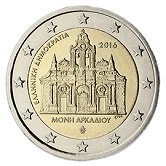 Details relating to the Greek Commemorative of 2016.

This coin was issued to commemorate the 150th anniversary of the fire in the Arkadi Monastery.

At the time of the Turkish occupation 1,000 Cretian insurgents entrenched themselves in the Arkadi monastery. In order not to be taken captive when the Turks stormed the monastery the insurgents tourched the monastery which contained a large quantity of gunpowder.

The resulting explosion is believed to have taken around 1,000 lives both Cretan and Turkish. This deed is regarded as the beginning of the freeing of Crete from Turkish rule.

The motif of the coin is a frontal view of the famous monastery.