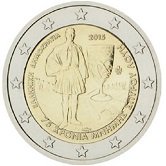 Details relating to the Greek Commemorative of 2015.

This coin commemorates the 75th anniversary of the death of Spyridon Louis.

Spyridon Louis was a Greek long distance runner and the first victor in the modern Olympic Games in 1896 in the marathon race. His victory occasioned great pride and joy among the Greek spectators and on the last lap around the stadium he was accompanied by the Greek princes Constantin and George.

The motif shows Louis in traditional costume together with the trophy he was awarded against the background of the Panatheanic stadium.

Around the edge of the inner circle are the following inscriptions – from eight to eleven o’clock:

The year of issue 2015 is at two o’clock and the mint mark is next to the trophy between two and three o’clock. Finally the initials of the engraver can be seen at six o’clock.