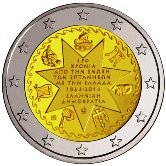 Details relating to the Greek Commemorative of 2014.

This coin commemorates the 150th anniversary of the unification of the Ionian Islands with Greece.

A very attractive and interesting coin!

In the centre of the inner circle is a seven pointed star, between the points of which are seven symbols representing the seven IIonian islands.

Clockwise from top, the visuals symbolize the following islands:

ii) —Zakynthos is represented by the sacrificial tripod of Apollo

iii) —Ithaca: Odysseus is depicted with the anciant hat Pileus

iv)— Paxi's emblem is a trident: according to a mythological tale, it was created when Poseidon hit the island of Corfu with his trident, splitting it in two

v)— Kythira, the island of celestial Aphrodite, depicted on a scallop, symbolizing her 'emergence from the sea'

vi)— Lefkada is represented by the 'Apollonian harp' ("Απολλώνια Άρπα")

Within the seven pointed star is the following inscription:

Translation with help of dictionary and very imperfect knowledge – if any native Greek speakers send an improved translation that would be great!

In the bottom spike of the star is the mint mark and between seven and eight o’clock is the sign of the designer.