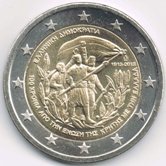 Details relating to the Greek Commemorative of 2013.

The coin commemorates the international recognition of the union of Greece and Crete 100 years ago.This union was internationally recognised in the London Treaty which was signed at the end of the first Balkan war.

In the inner circle Cretian rebels are shown planting the Greek flag at Theriso in 1905. This symbolizes the struggle for unification with Greece.

The mint mark is at two o'clock and immediately thereunder the dates 1913-2013.