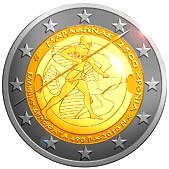 Details relating to the Greek Commemorative of 2010.

This coin commemorates the famous “Battle of Marathon” that took place no less than 2,500 years ago.

In the year 490 B.C. the Greeks met and defeated the numerically superior force of Persians led by their King Darius. The details of the battle are not certain but certain is that the Persians sustained heavy losses and the Greeks won and saved not only their own country but the rest of Europe from Persian domination.

Within the inner circle there is a synthesis of a shield and a warrior. This can be seen as symbolizing the battle for freedom. The bird on the shield represents the birth of western civilization.

The mint mark appears at ten o’clock  and the initials of the designer are to be seen a little in from nine o’clock.