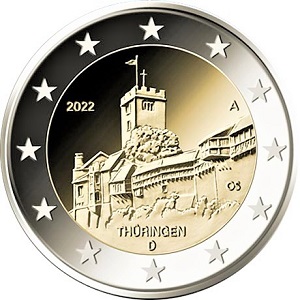 Details relating to the German Commemorative of 2022.

The province featured in 2022 is Thüringen and Thürigen is represented by Wartburg castle.

Wartburg castle is situated in the west of Thüringen and overlooks the town of Eisenach. It was the first German castle to be included in the UNESCO World Heritage List and is where Luther translated the bible into German.

On the edge of the inner circle at six o'clock the name THÜRINGEN is seen and immediately beneath it is the country designation "D" (for Deutschland).

At two o'clock is the mint mark "A" and at ten o'clockthe year of issue.

The designer's sign is shown at ca. four o'clock.