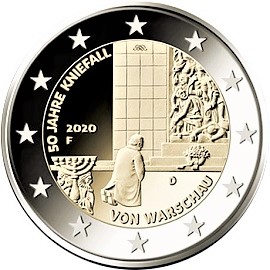 Details relating to the German Commemorative of 2020.

This coin commemorates the 50th anniversary of the visit of Willy Brandt to the Warsaw Ghetto where he laid a wreath in honour of the uprising of the Ghetto in 1943.

After laying the wreath Brandt fell on his knees and observed a short period of silence. This act of humility, acknowleging the crimes admitted by the Nazis and tacitly asking for forgiveness helped in some measure to further the rapproachement between Poland and Germany.

The motif of the coin is simply a representation of this act. We see Brandt on his knees in front of the memorial.

On the edge of the inner circle between seven and eight o'clock is a seven-armed candlestick which is symbolic of Judaism.The candle stick is flanked by two lions.

Further inscriptions appear around the edge of the inner circle are:

Finally, just under the wreath is the country designation "D" - (Deutschland/Germany)