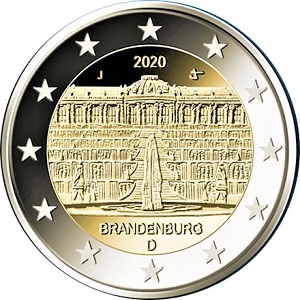 Details relating to the German Commemorative of 2020.

This is the 14th coin in the German series of the different provinces in the country.

The honoured province this year is Brandenburg and Sanssouci Palace has been chosen to represent Brandenburg.

The name of the palace - Sanssouci -  is from the French sans souci which means without worry.

Sanssouci Palace is one of the most famous Hohenzollern castles in the Brandenburg capital of Potsdam.

The Prussian King Friedrich II had the place built in the years 1745 to 1747. In 1990 the palaces and parks of Potsdam and Berlin were declared a World Heritage Site.

Frederick the Great wanted  to be buried on the top vineyard terrace and this finally took place in 1991.

At the top of the inner circle (twelve o'clock) is the year of issue - 2020 and to the left (eleven o'clock) is the mint mark. At one o'clock are the initials ("JT") designer Jordi Truxa.

Finally at the bottom is the name of the province BRANDENBURG and the mark of the issuing country "D".