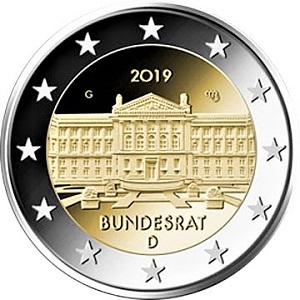 Details relating to the German Commemorative of 2019.

This coin commemorates the 70th Anniversary of the establishment of the Bundesrat – the upper house in the German parliament.

In the inner circle we see the building in which the Bundesrat is housed. It was completed in 1904 and initially was the seat of the First Chamber of the Prussian Landtag. It was known as the Prussian Manor House. After 1946 it was used by the Academy of Sciences of the German Democratic Republic (East Germany). As of 2000 it  has been the seat of the Bundesrat- the latter was constituted in 1949.

Finally, right at the bottom of the inner circle is the sign of the issuing country “D”.