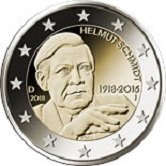 Details relating to the German Commemorative of 2018.

This coin commemorates the 100th anniversary of the birth of the German statesman and Chancellor Helmut Schmidt.

In the inner circle we see Schmidt in what was for him a typical stance while discussing some issue.

Around the edge of the inner circle,running from twelve to three o’clock is the inscription “HELMUT SCHMIDT”. Next to three o’clock are the dates 1918-2015 (Schmidt’s date of birth and death). Directly thereunder is the mint mark.

At nine o’clock is the country designation “D” (Deutschland – Germany) and thereunder the year of issue 2018.