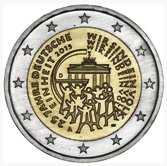 Details relating to the German Commemorative of 2015.

This coin celebrates 25 years of German unification. On 3rd October 1990 the DDR (German Democratic Republic) became a part of The Federal Republic of Germany. There were no longer two Germanies (commonly called West Germany and East Germany) but now one united nation. The 3rd October is now the National Day of Germany.

At five o’clock are the initials of the designer “BW” and at seven o’clock is the mint mark.