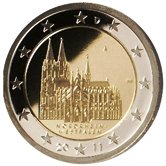 Details relating to the German Commemorative of 2011.

This is the sixth of the German series of commemorative coins representing the provinces of Germany. This one represents Nordrhein-Westfalen.

The Cologne cathedral (Kölner Dom), a Roman Catholic church in Cologne was chosen to represent Noedrhein-Westfalen.

The cathedral was designated an outstanding example of Gothic architecture and joined the UNESCO World Heritage.

The country designation “D” is shown in the outer ring between twelve and one o’clock and the year of issue 2011 at the bottom of the outer ring.