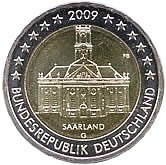 Details relating to the German Commemorative of 2009.

This is the third issue in the German series featuring the different provinces of Germany.

This year the province featured is Saarland and it is represented by Ludwigskirche (Church of Ludwig) in Saarbrücken.

Ludwigskirche is a protestant church constructed in the baroque style and is regarded as one of the foremost baroque churches in Germany. Work on the church was completed in 1775.

Under the church is the name of the province ”SAARLAND” and directly thereunder the mint mark. The initials of the artist are seen at approximately two o’clock.

The country of issue "BUNDESREPUBLIK DEUTSCHLAND" appears boldly in the bottom half of the outer ring. From 2010 onwards a simple "D" was used to stand for Germany. This appeared in the outer ring until 2013 after which it appears in the inner circle.

The same is true of the year of issue, which in this coin appears at the top of the outer ring.