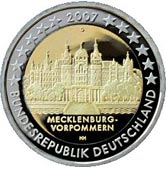 Details relating to the German Commemorative of 2007.

This is the second of the German series of commemorative coins representing the provinces of Germany. This one represents Mecklenburg – Vorpommern.

The mint mark can be seen at the top of the inner circle at exactly twelve o’clock.

The initials of the engraver “HH” appear at the bottom (six o’clock).

The country of issue "BUNDESREPUBLIK DEUTSCHLAND" appears boldly in the outer ring. From 2010 onwards a simple "D" was used to stand for Germany. This appeared in the outer ring until 2013 when it is in the inner circle. The same is true of the year of issue. From 2013 onwards the outer ring,for all euro Commemorative Coins, has been reserved solely for the twelve stars of the EU as this is held to better represent European unity.