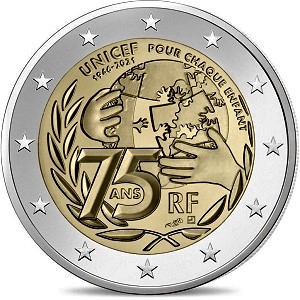 Details relating to the French Commemorative of 2021.

UNICEF was founded to help the children of Europe after the second world war.

In 1953 UNICEF was renamed the United Nations Children’s Fund. It now works for the welfare of children and mothers around the world - primarily in developing countries in the areas of health, family planning, hygiene, nutrition and education often providing aid in emergency situations.

The coin's motif is very interesting - it shows two children's hands supporting a globe (the earth). The hands of other children are seen holding the various pieces of the globe together - this no doubt promoting the idea that we are all dependant on one another in a united world.

Two olive branches spread out from the bottom (six o'clock ) and extend up the sides of the inner circle to around ten o'clock and two o'clock. The olive branches of course represent peace.

Around the edge of the inner circle - from eleven to three o'clock we see the inscriptions "UNICEF" and  POUR CHAQUE ENFANT" (for each child).Just under "UNICEF" are the dates of its founding as well as the year of issue - "1946-2021".

In the bottom left hand quadtrant is a very bold 75 and within the five is the word "ans" (years). Just after the5 is the country designation "RF" and thereunder is the mint mark and the sign of the designer.