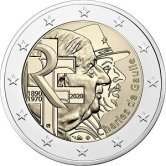 Details relating to the French Commemorative of 2020.

De Gaulle was undoubtedly one of the greatest French leaders of modern times and was a rallying point for the French in the dark hours of the Second World War.

de Gaulle is depicted twice on the coin - in the background as a general who led The France's Resistance to the German occupation during World War II.

Also in the Cross - between eight and nine o'clock are the dates of birth and death of de Gaulle as well as the year of issue - respectively 1890, 1970 and 2020. At the bottom of the cross (seven o'clock) is the mark of the coin designer Joaquin Jimenez.

On the edge of the inner circle, running from five to two o'clock is the inscription “Charles de Gaulle”.

Finally at the bottom of the inner circle are the mint mark and the  mark of the mint master.

You may have noted the unusual number of coins minted, not as is usually the case a round hunderd thousand or million but  18,061,940.
This commemorates his famous appeal sent to the French resistance on the BBC on 18th of June 1940.

All in all, a very interesting coin with much symbolism built in.