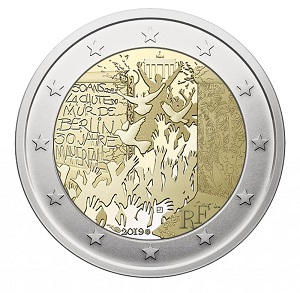 Details relating to the French Commemorative of 2019.


This coin commemorates 30 years since the opening of the Berlin Wall in 1989. It is a joint issue by Germany and France. The fall of the Wall led to the reunification of Germany and symbolised the end of a devided Europe.

The motif of the coin shows the Berlin Wall, open in the middle. Through this opening three peace doves are flying. In front of the opening is a cheering crowd and in the background, the Brandenburg Gate can be seen.The Brandenburg gate has long been seen as a symbol of Berlin.

On the edge of the inner circle at five o'clock is the country code "RF" and between six and seven o'clock is the year of issue 2019 and directly above seven is the mint mark.