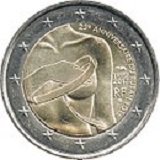 Details relating to the French Commemorative of 2017.

The coin commemorates the 25th anniversary of the “Pink Ribbon” -  symbol of the fight against breast cancer.

Since 2004, a Pink Ribbon Award ("Prix Ruban Rose") has been awarded annually in France to support breast cancer research and promote innovative treatments.

The motif is a female breast symbolically protected by the bow and a hand. Around the edge of the inner circle from twelve to four o’clock is the inscription: ”25e  ANNIVERSAIRE DU RUBAN ROSE" (25th anniversary of the Pink Ribbon).

Under one another, around three o’clock we see the mint mark,1992,2017 and the country designation “RF” and finally the mark of the mint master.