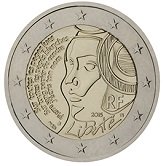 Details relating to the French Commemorative of 2015

The coin commemorates the 225th anniversary of the ”Fête de la Federation”.In the English-speakingworld, this is known as Bastille Day. It was first held in Paris on 14th July 1790 then commemorating the first year since the storming of the Bastille and is seen as a festival of reconciliation and unity of the French people.

In the inner circle is a modern version of Marianne – symbol of the French Republic – in profile and wearing the famous Phrygian cap and cockade, a clear sign for being a supporter of the revolution.

In an arc on the left of the inner circle is a verse from the poem “Liberté”(Freedom) by the French poet Paul Éluard.

And the name of course was “Liberté” which is shown at the bottom of the coin.

The country is identified “RF” at four o’clock and next to it is the year of issue. The mint mark is on the edge of the inner circle at seven o’clock.

An interesting point : A coloured version of the coin was minted (only 10.000 coins). They are in fact an official medium of payment but in fact will almost certainly never end up in circulation but simply be kept by collectors. The authorities frown on the production of coloured versions but as the numbers actually minted are small it is tolerated. The colours seen are the red and blue of the cockade.