Details relating to the French Commemorative of 2013 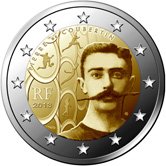 It was de Coubertin, who in 1880 set in motion a movement to reinstate the Olympic Games. He was inspired by archeological excavations in the Greek Olympia. In 1894 he founded the International Olympic Committee. Finally, on 6th April 1896, the first of the modern Olympic Games took place in Athens.

The motif of the coin shows a portrait of a  young de Coubertin looking out boldly from the coin. In the background are a series of stylized Olympic Rings. In four of the rings different athletes are shown representing different athletic discplines.

Around the edge of the inner circle from ten o’clock to one o’clock is the inscription “PIERRE DE COUVERTIN”. The name of the issuing country and the year of issue –“RF 2013” are seen in a ring between eight and nine o’clock.

Finally, at the bottom at seven and four o’clock, are the mint mark and the mark of the engraver.