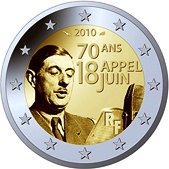 Details relating to the French Commemorative of 2010.

This coin commemorates the 70th anniversary of the historic broadcast of General Charles de Gaulle on 18th June 1940.

He broadcast from the BBC after the fall of France and motivated the French to continue the struggle against the Germans.

The motif in the inner circle shows de Gaulle in front of a microphone broadcasting his speech.

At the top of the inner circle is the year of issue preceded by the mint mark and followed by the mark of the mint master. Thereunder is the somewhat bold inscription “70 ans 18 Appel Juin” (70 years 18 June Call). Finally at five o’clock , the issuing country is represented by “RF”.