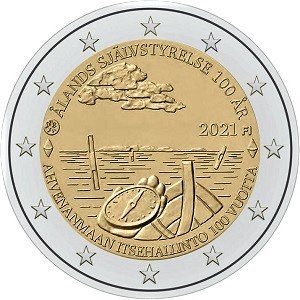 Details relating to the Finnish Commemorative of 2021.

The Åland Islands have had a somewhat chequered history being for many years part of the Swedish empire then being for some time under Russian control and are now an automonous part of Finland.

This was decided by the League of Nations in 1921and this coin commenorates the 100th anniversary of this state of affaires.

The motif of the coin shows a stetch of the Gulf of Bothnia between Sweden and mainland Finland. Skerries are seen on the horizon and clouds in an otherwise clear sky.

Towards the bottom of the inner circle the prow of a boat as well as a hand holding a compass are to be seen. Three rod-shaped buoys in the water warn of shallows.

Around the edge of the inner circle are two inscriptions meaning "Åland self-government 100 years" in both Swedish and Finnish. From ten to two o'clock is the Swedish version -  " ÅLANDS SJÄLVSTYRELSE 100 ÅR” and from nine o'clock to three o'clock is the Finnish version - “AHVENANMAAN ITSEHALLINTO 100 VUOTTA”.

The year of issue and sign of the issuing country are shown horizontally near the edage of the inner circle just above three o'clock - "2021 - FI". Directly opposite, just above nine o'clock is the mint mark -  a lion within a small circle.

Finally at nine and tgree two buoys are depicted.