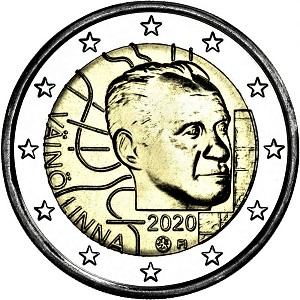 Details relating to the Finnish Commemorative of 2020.

This coin commemorates the 100th anniversary of the birth of the Finnish author Väinö Linna.

Väinö Linna is recognised as one of the greatest Finnish authors of the 20th century. His most famous work is a war novel "Unknown Soldier". The novel reflects the experiences of Linna who fought in the so called Continuation War (1941-1944).

The novel portrays war in all its harshness and is devoid of any romanticism and the depiction of war as noble and heroic.

Tho motiv of the coin is largely a portrait of Linna that mainly occupies the right side of the coin.

A number of wavy lines are seen to the left of the portrait and to the right on the edge of the inner circle, between two and five o'clock, are what appear to be solid blocks.

Around the inner circle from ten to seven o'clock is the inscription “VÄINÖ LINNA”.

Under the portrait we see the year of issue, the designation of the issuing country as well as the mint mark - 2020, FI and a lion within a circle.