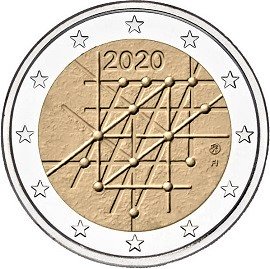 Details relating to the Finnish Commemorative of 2020.

This coin commemorates the 100th Anniversary of the founding of the University of Turku.

The university is named after the city in which it stands viz. Turku and is the second largest university in Finnland.

The motif, abstact in nature, was designed by Petri Neuvonen, and purportedly represents a neural network which symbolizes the interaction between universities and society.

On the edge of the inner circle, between three and four o'clock we see theb mint mark and the isuuing country representation "FI".